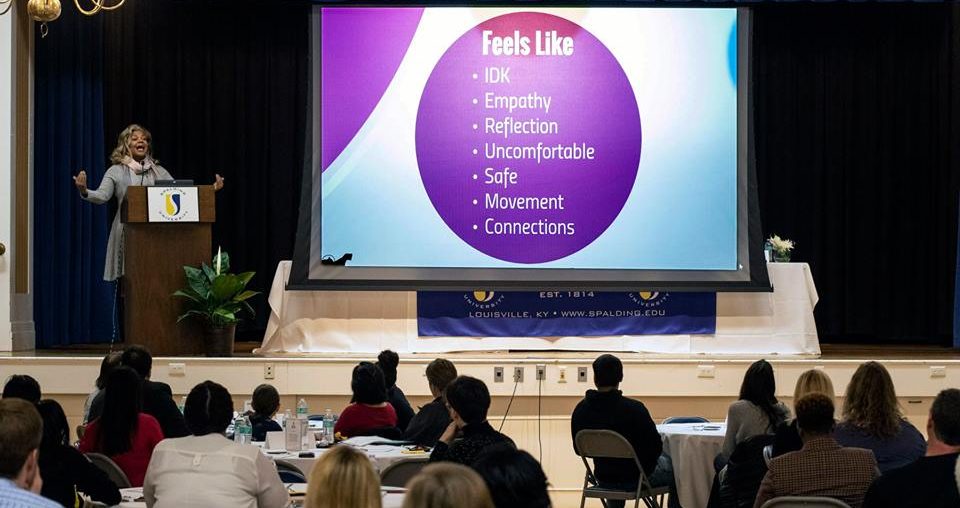 A crowd of about 150 Jefferson County Public Schools faculty and staff and other members of the community gathered this week at Spalding University for the second annual Restorative Practices Summit to learn about the impact of restorative practices in schools.

A common theme emerged among all the speakers: This is important, meaningful work.

“I believe in high expectations for students, but we need to turn to high supports as well,” JCPS Superintendent Dr. Marty Pollio said. “That’s where we miss the boat so often is providing supports for kids and teaching kids the right way to do things. We have kids facing trauma at greater rates than (at any other time) in my career and coming to school with so many things that they experience outside of the school walls.

“We have two options. We can say, ‘We have high expectations, and if you don’t meet them, you’re out.’ Or, No. 2, we can say, ‘We’re going to do everything we can to teach you the right way, to support you, to help you, and most importantly, to restore.'”

This was the second year Spalding has hosted the Restorative Practices Summit in partnership with JCPS, highlighting the innovative, thoughtful use of restorative methods as an intervention strategy. Restorative practices focus on repairing harm and building and restoring relationships.

During Wednesday’s public session at the College Street Center, representatives from Western Middle School, Slaughter Elementary School and Shawnee High School, which have fully implemented restorative practices, explained how the methods have affected school climate and culture. There was also a panel, moderated by JCPS Chief Communications Officer Renee Murphy, that featured faculty and students from Engelhard Elementary and Waggener High School.

All the speakers said their schools have seen reductions in disciplinary referrals and suspensions – at Shawnee, for instance, suspensions went down from 673 in 2016-17 to 359 over the same period this school year – and there have been meaningful changes in teacher-to-student and student-to-student communication.

Western Middle School counselor Judith Wilson, whose school’s referrals are down 13 percent since implementing restorative practices, said that students who have built a relationship of trust with teachers often are willing to share deeply personal details about their emotions or challenges they’re facing.

“When you build a place of safety for them, you’re going to have amazing culture and climate in your building where students know that you love them,” she said.

Jeffrey Elliott, Positive Behavior Interventions and Supports coach at Slaughter Elementary, said an important restorative technique is the use of “affective language” when speaking with children, creating a more personal, emotional engagement. He said one subtle example is to alter a standard greeting of, “Good morning,” to a question that asks the child about his or her day, because it shouldn’t be assumed that the child is having a good morning.

Amina McQueen, a student at Engelhard Elementary, said her class has a daily “temperature check” exercise in which all the students rank their mood on a numbered scale.

“If you’re not having a good day,” she said, “the other students will know and say, ‘Hey, are you OK?’ and the teachers will know at the same time.”

By the 2019-20 school year, JCPS will have 33 schools trained on the full implementation of restorative practices. A total of 156 schools will have a top level of academic and behavior interventions in place for student support and relationship-building.

Pollio said teachers and school leaders should view the restorative approach to students the same way they would their own children.

“When our children make a mistake at home, yes, we have to correct them, and many times we have to take action with them, but would we ever not have the other side of it?” he said. “Where we bring them back, tell them what they did wrong,  ask them how we’re going to change, give them a hug and tell them we still love them? Would any parent not do that? We have to do the same thing in this work.”

Spalding President Tori Murden McClure said the university has embraced restorative practices for years and recounted an instance in which the university used them to deal with a student who’d made a mistake that could have had serious criminal consequences. Through the restorative process, he went on to repair the harm he’d done and ended up graduating.

“Finding creative ways to the deal with mental health issues of our young people, to deal with the behavioral issues, we know those are tied together, and we need to be creative and approach them in ways that are full of heart,” she told the crowd. “I’m really grateful that you’re here and doing this important work.”

“Spalding says they are a small community, but they are mighty,” she said.

Wednesday’s program concluded with Spalding presenting its inaugural Restorative Practices Awards to individuals and organizations that have used restorative practices effectively and advanced the understanding of them.

“It’s not my award but the team’s award,” Hensel said “I have 10 resource teachers who spend every day in the buildings supporting teachers and schools doing this work, so this is really recognizing the work that they do.”

The conference continued Thursday with a closed day of training for JCPS faculty and staff that was led by Florida educator and student support expert Penelope Lowe.

“Spalding has been an incredible partner in providing us with resources and ideas and the people to do this (conference) in a way that we would not be able to do on our own,” Hensel said. “They believe in the work that we’re doing.”

View a Facebook gallery of pictures from Wednesday’s portion of the conference below or at this link.