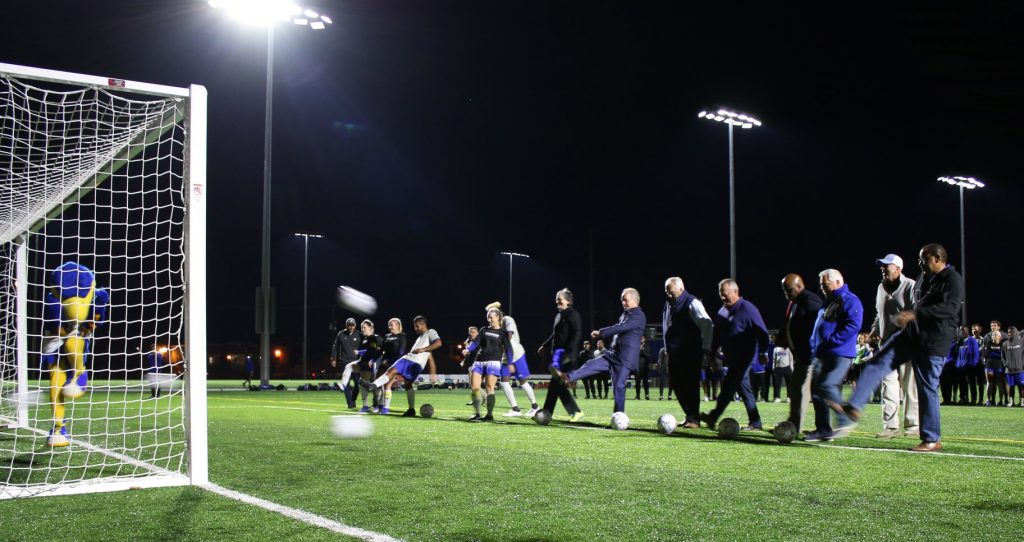 The ceremonial 'First Kick' of Spalding students, administrators, donors and trustees during the Oct. 23 grand opening. Ollie the Eagle tried his best - but wasn't so great - as goalkeeper.

With a big crowd in attendance on a perfect, clear night, Spalding University broke in its new athletic fields complex on the evening of Oct. 23 with a grand opening celebration that won’t be forgotten anytime soon.

About 800 fans gathered under the lights of the 7.3-acre complex between South Eighth and South Ninth streets to watch the Golden Eagles’ men’s and women’s soccer doubleheader, as well as a grand opening ceremony and ceremonial “First Kick” of soccer ball between games.

It was the culmination of nearly six years of private fundraising for the complex and about six months of construction, which was overseen by general contractor Schaefer Construction. The finished product will be a source of pride and achievement for the university for years to come.

“And this was a big project,” the mayor said.

“What I love about Spalding is that you guys work hard each and every day,” Fischer said, before alluding to McClure’s most famous individual athletic feat. “It’s kind of like rowing across the Atlantic Ocean, one stroke at a time. If there’s something to be done, you can bet on this team here at Spalding. The kind of hope that you all represent, the persistence that you represent, it’s come true here tonight with this great facility. It’s a wonderful bridge for hope for our entire community. Tori, Roger, and the entire team, thank you very much on behalf of our great city. Wonderful job.”

LEARN MORE ABOUT THE FIELDS PROJECT AND HOW TO SUPPORT IT

Located on the site of a former unused industrial brownfield and about four blocks west of the primary campus, the athletic complex provides for the first time an on-campus home for Spalding’s men’s and women’s soccer and softball teams, which have previously had to travel to high school facilities around the city to practice and host games.  The complex includes two turf soccer fields and a turf softball field that are lighted and can be used year-round. The Spalding softball team will begin playing at the complex during the upcoming spring 2020 season.

“Now (the soccer and softball programs) have a place that they can call their own,” Burkman said. “It’s a game-changer. You think about it from a recruiting standpoint and how it’s going to level that playing field, so to speak. And you can already see on the faces of our athletes how excited they are. When you talk to them about it, they just start smiling, and they just light up. And in the prospects who come to campus, you can see their eyes light up as well.”

New Spalding sports programs are set to make the complex their home as well.

The other soccer field is lined for field hockey, allowing Spalding to explore adding a program in that sport, too.

The complex will also be available for outside clubs and schools to rent.

Surrounded by dozens of new trees and extensive landscaping, the fields complex also helps beautify the neighborhood at a site where there was previously nothing but asphalt and weeds. It continues Spalding’s effort to green and transform urban spaces south of Broadway. In recent years, the school turned a 2.2-acre parking lot into Trager Park – a grassy public recreational space at the corner of South Second and West Kentucky – and built the Mother Catherine Square green space in the center of campus at South Third and West Breckinridge.

More photos | Look back at months’ of the athletic fields’ construction progress and the grand opening on Spalding’s Facebook page.